by biedexdesk
in Uncategorized
10 min read

In this April 22, 2020, file photo medical workers bring a patient to the Northbridge Health Care Center in Bridgeport, Conn. A report from Senate Democrats finds that the Trump administration was slow to comprehend the scale of COVID-19’s impact on nursing homes and a disjointed federal response only compounded the devastating toll. (AP Photo/Frank Franklin II) 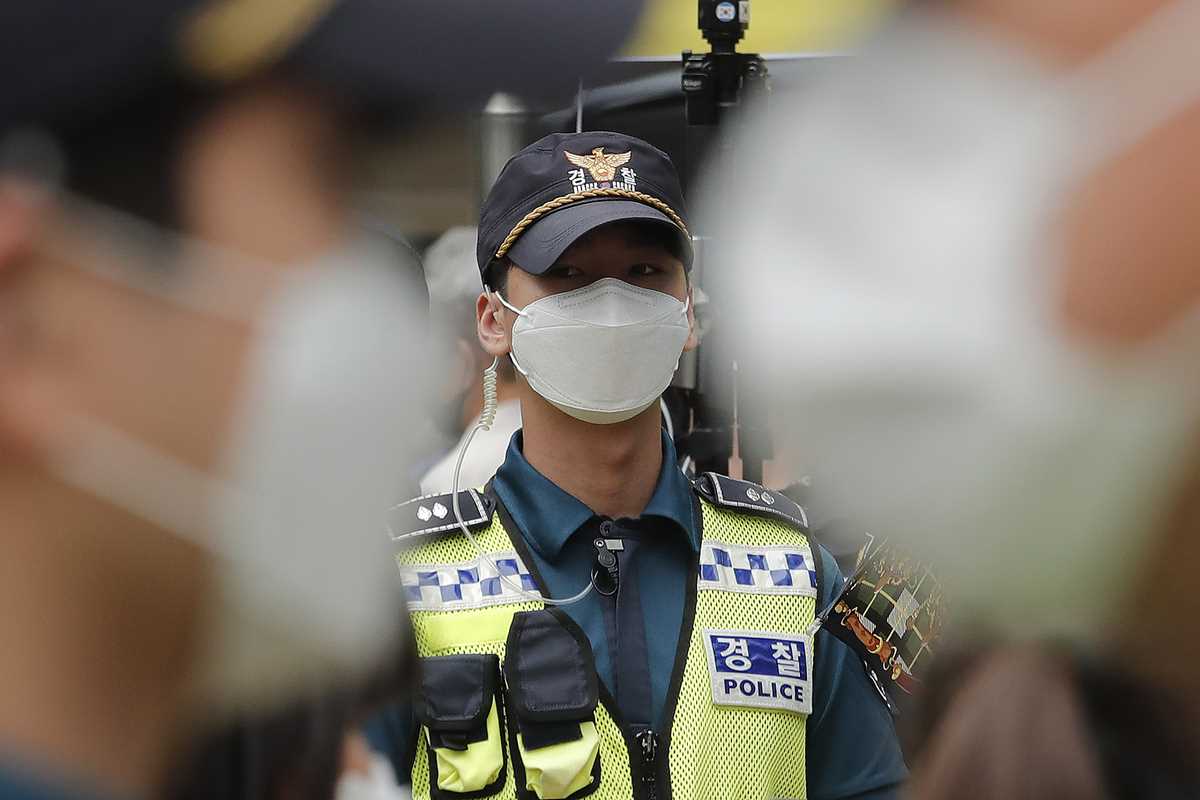 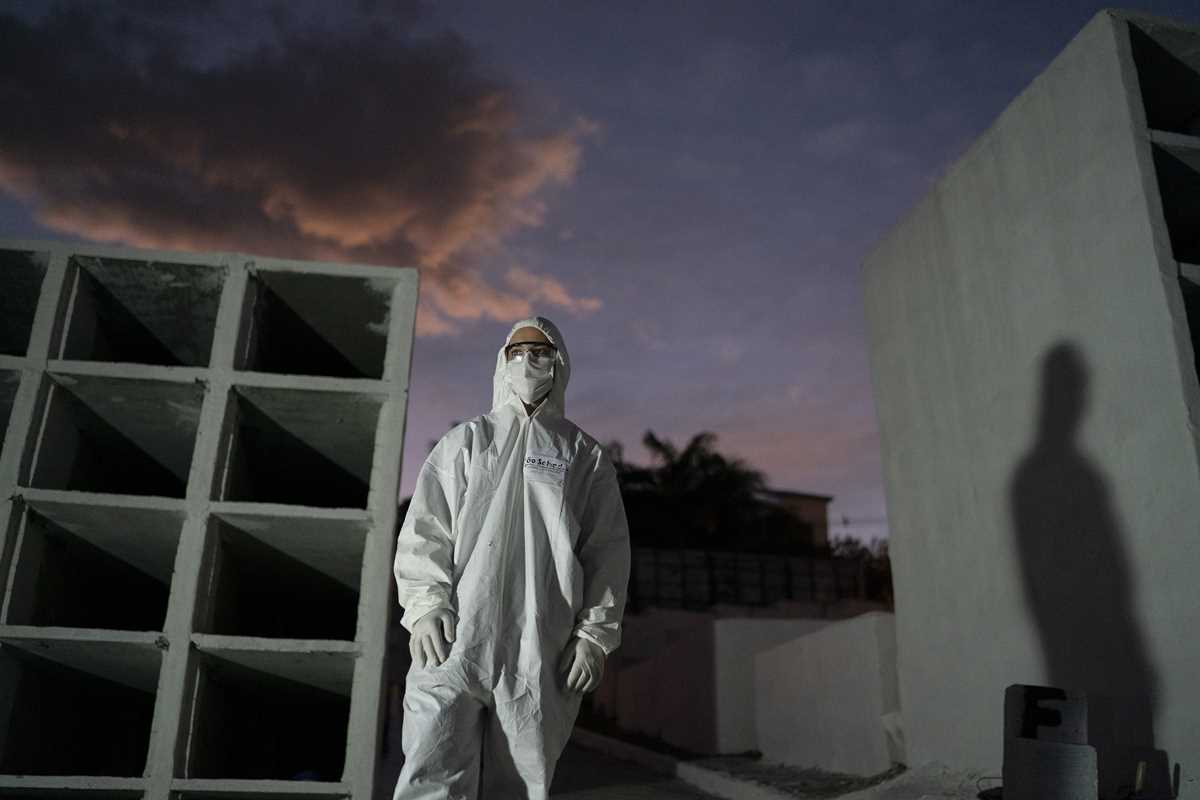 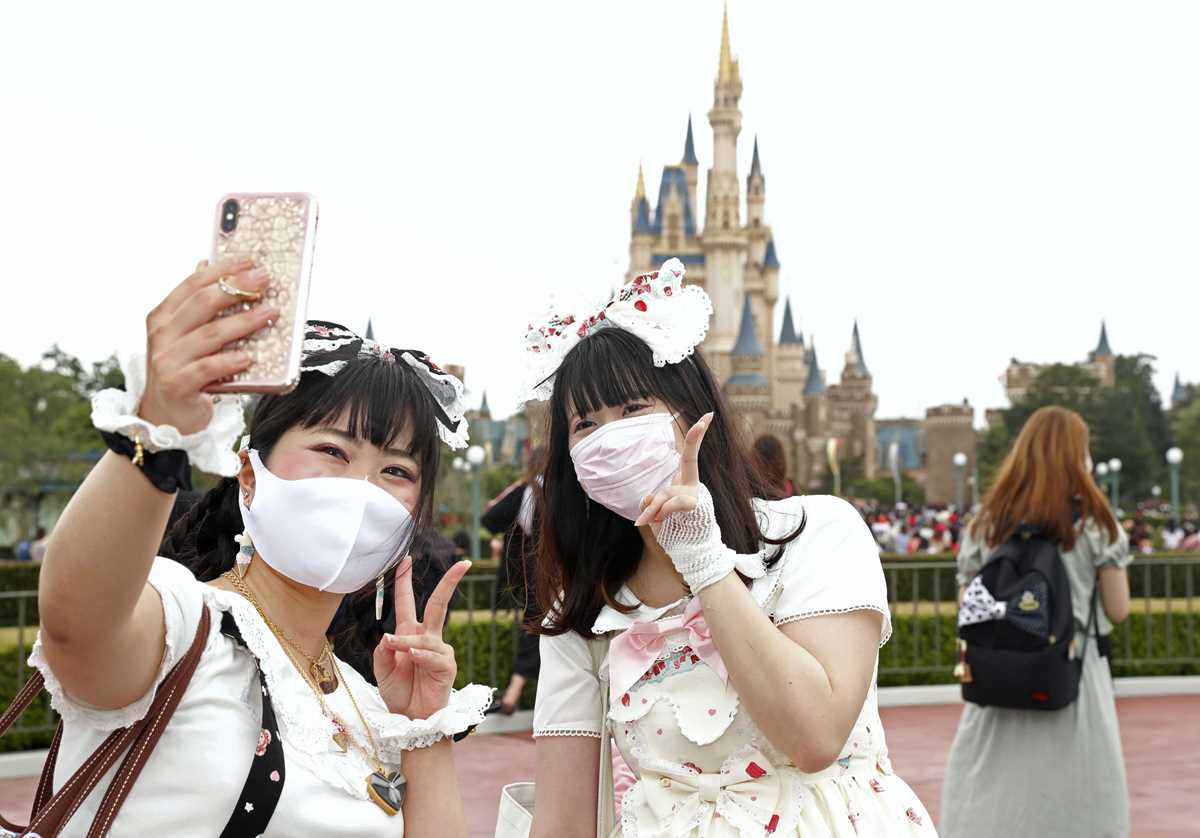 Visitors wearing face masks to protect against the spread of the new coronavirus take a selfie at Tokyo Disneyland in Urayasu, near Tokyo, Wednesday, July 1, 2020. Tokyo Disneyland reopens for the first time in four months after suspending operations due to coronavirus concerns. (Kyodo News via AP) 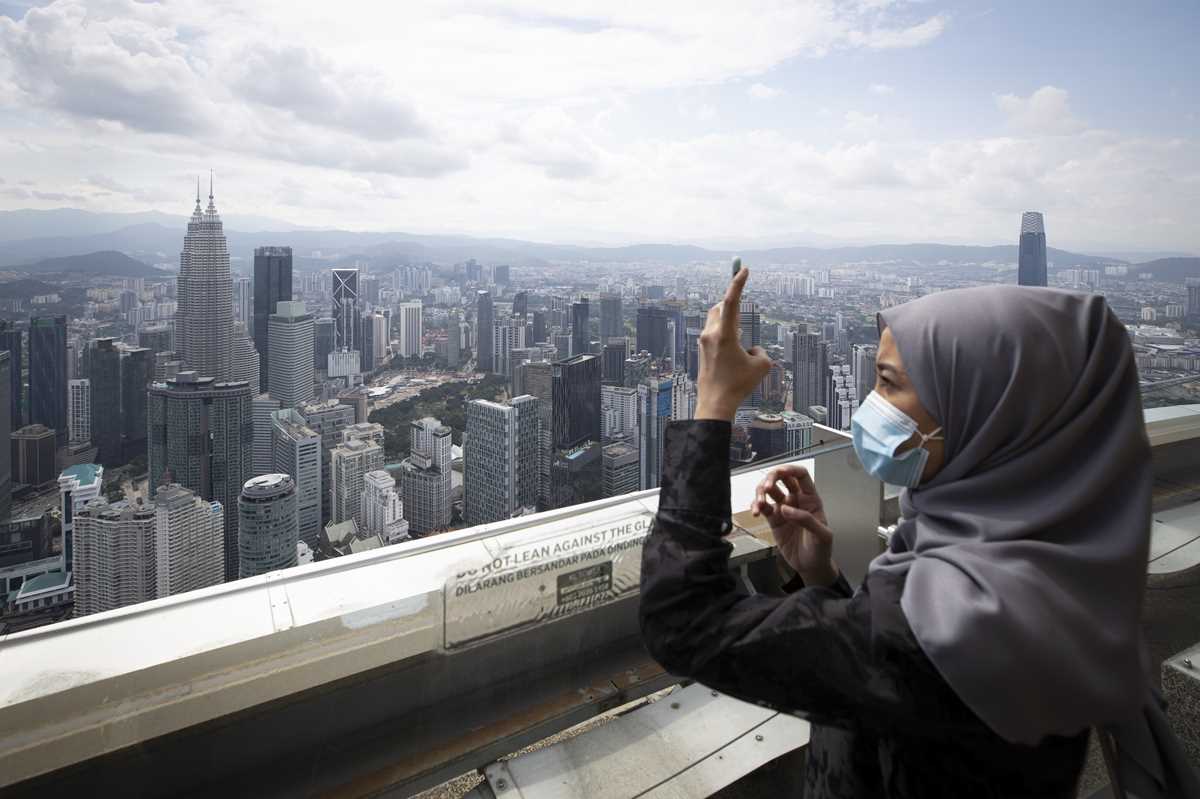 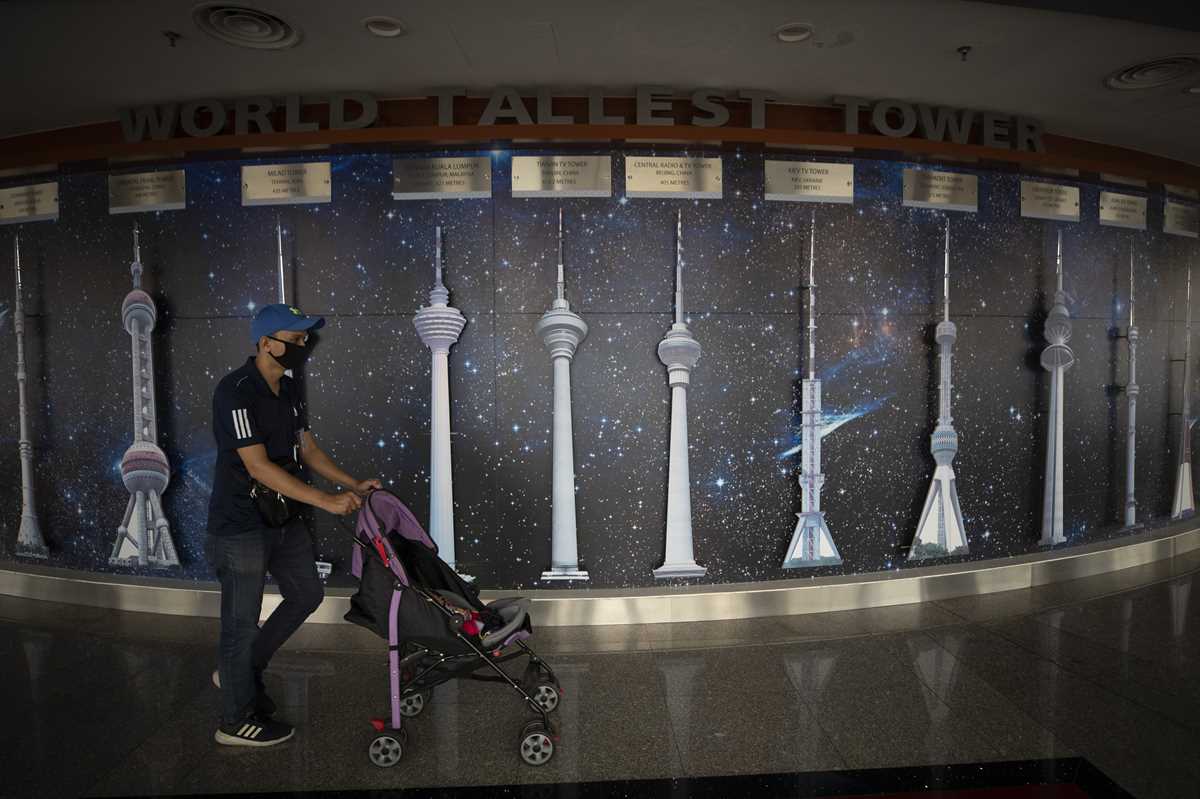 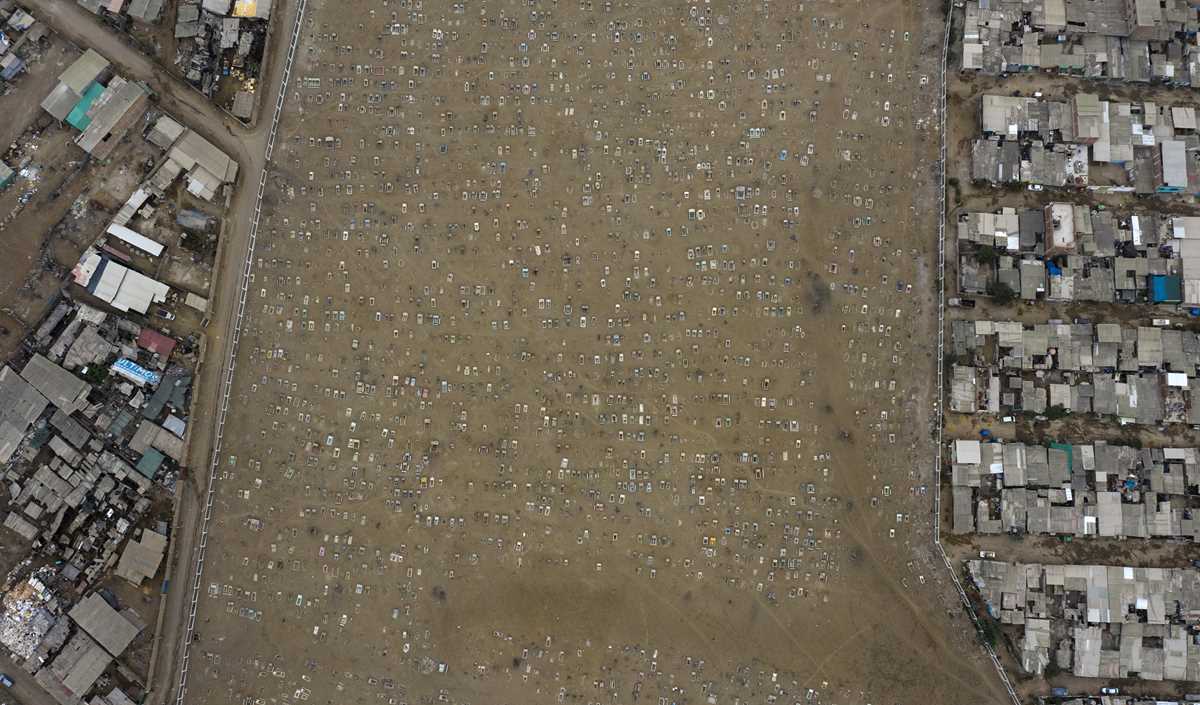 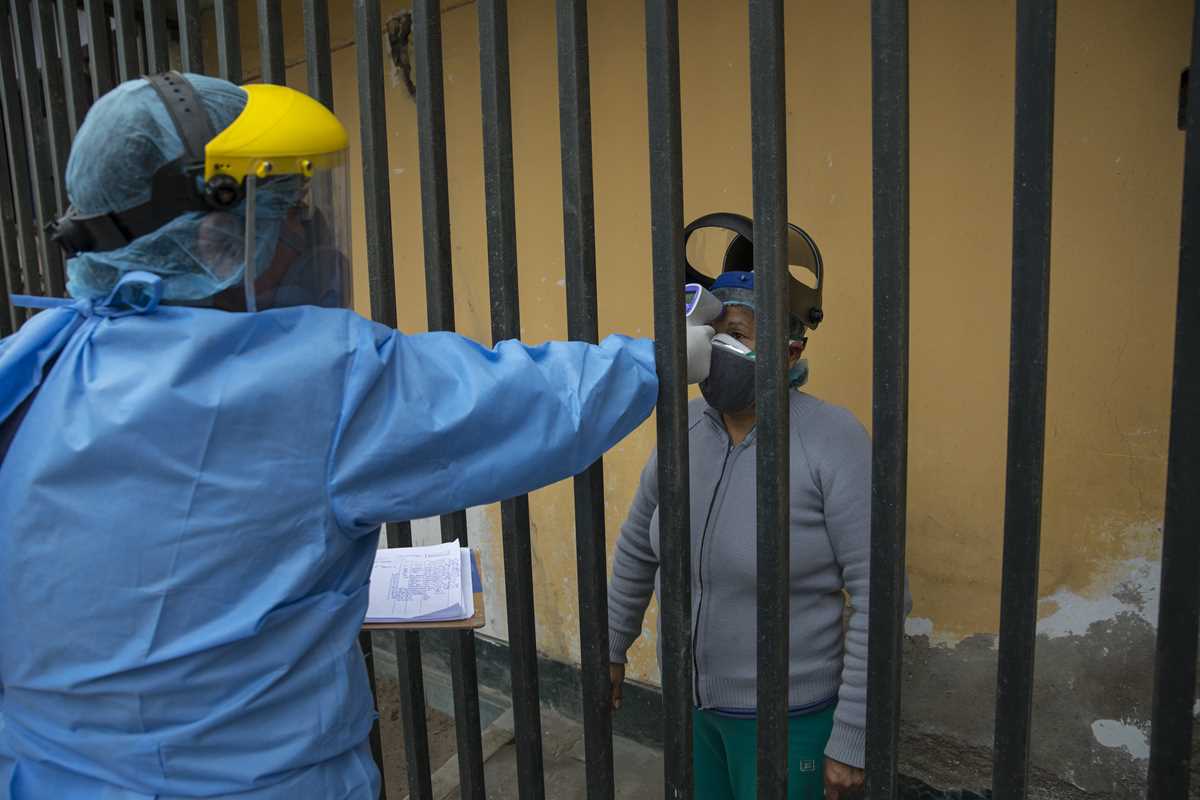 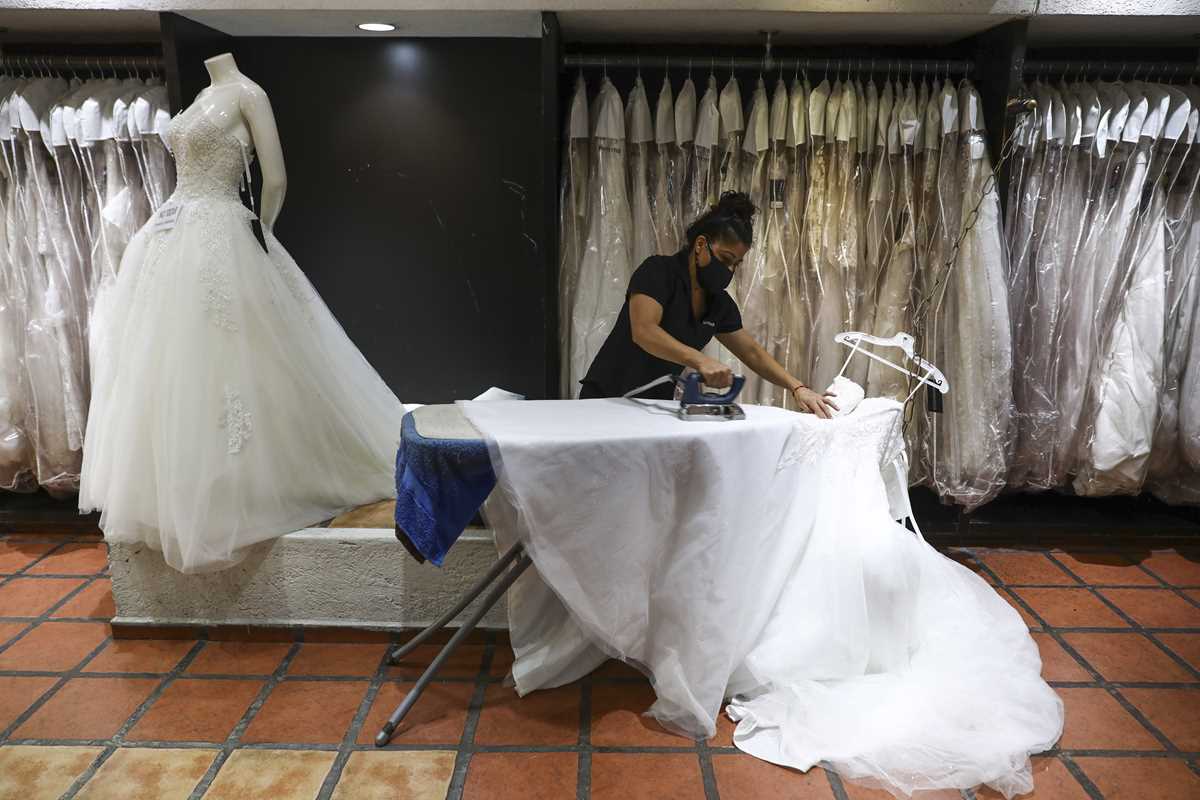 A woman wearing a mask to curb the spread of the new coronavirus irons a wedding dress at a store in Mexico City, Tuesday, June 30, 2020. (AP Photo/Eduardo Verdugo) 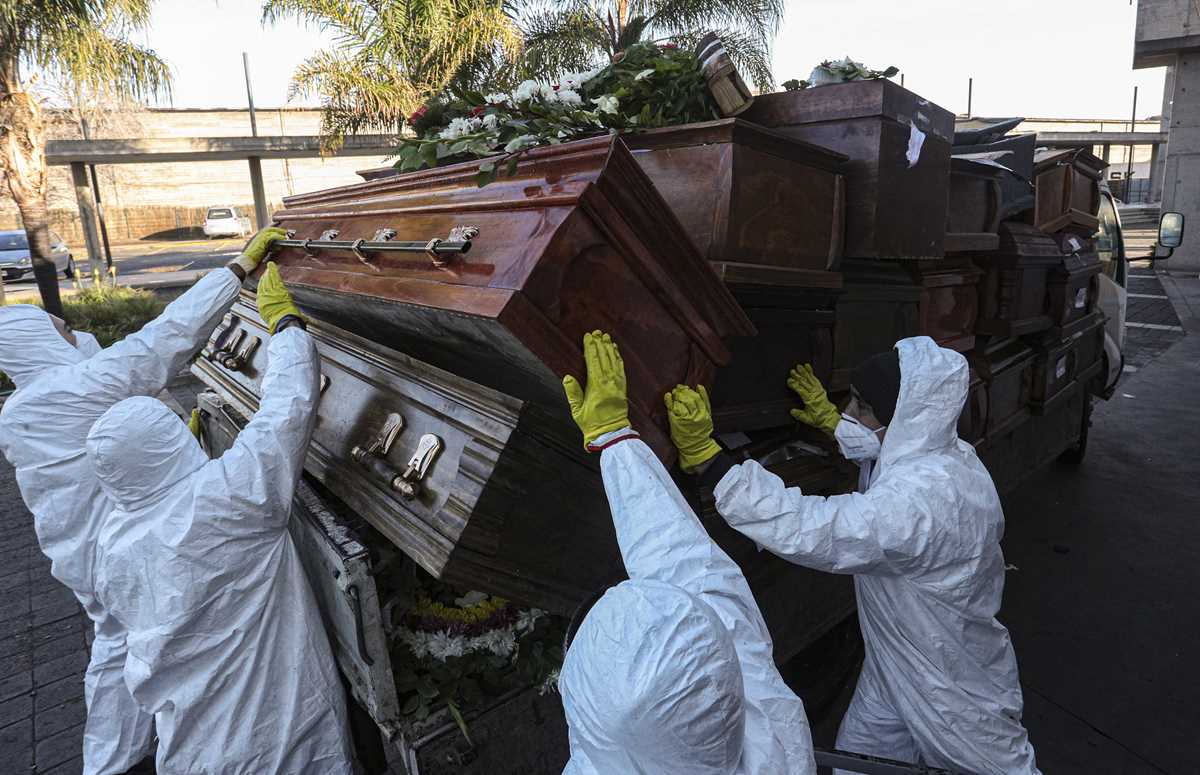 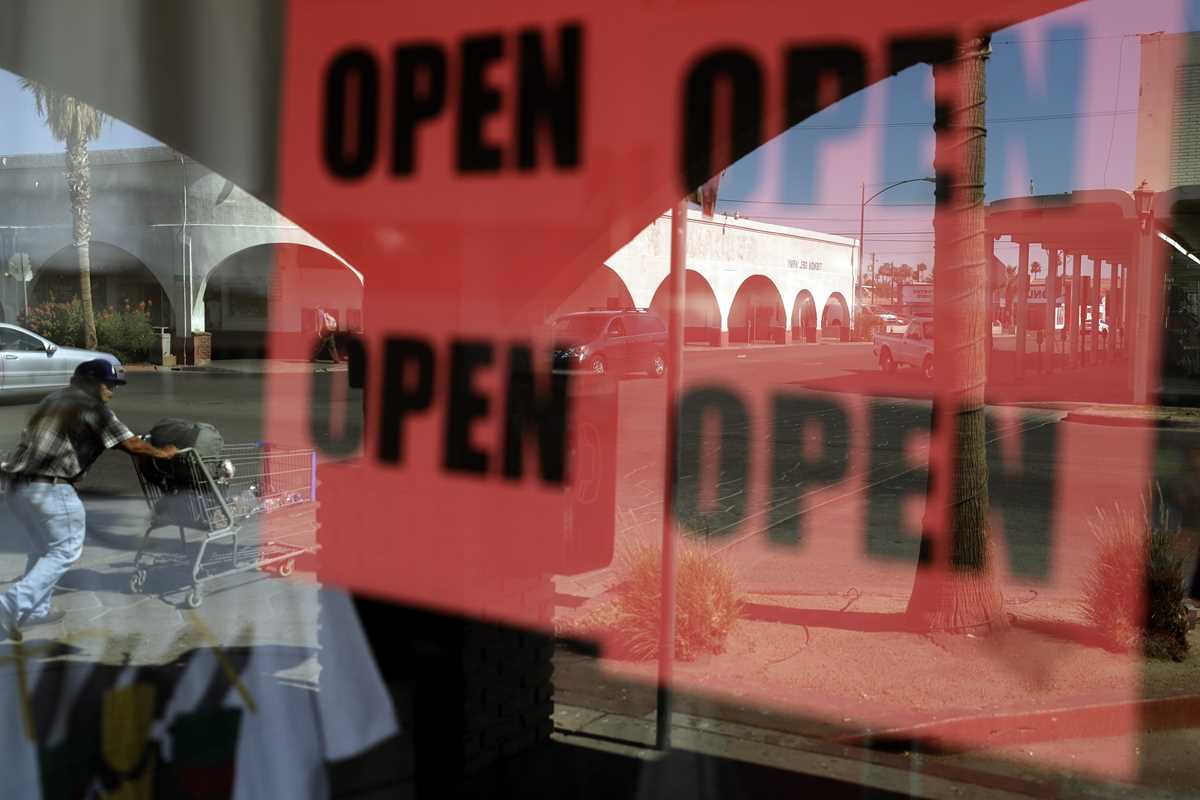 A man passes a clothing shop with open signs in the window, Tuesday, June 30, 2020, in Calexico, Calif. Saddled with a surge in positive cases and hospitalizations for the new coronavirus, a farming region on California’s border with Mexico is now forced to backpedal on reopening its battered economy. The Imperial County board of supervisors unveiled a plan late Monday that includes closing businesses deemed non-essential, except for curbside pickup, and shuttering county parks. (AP Photo/Gregory Bull) 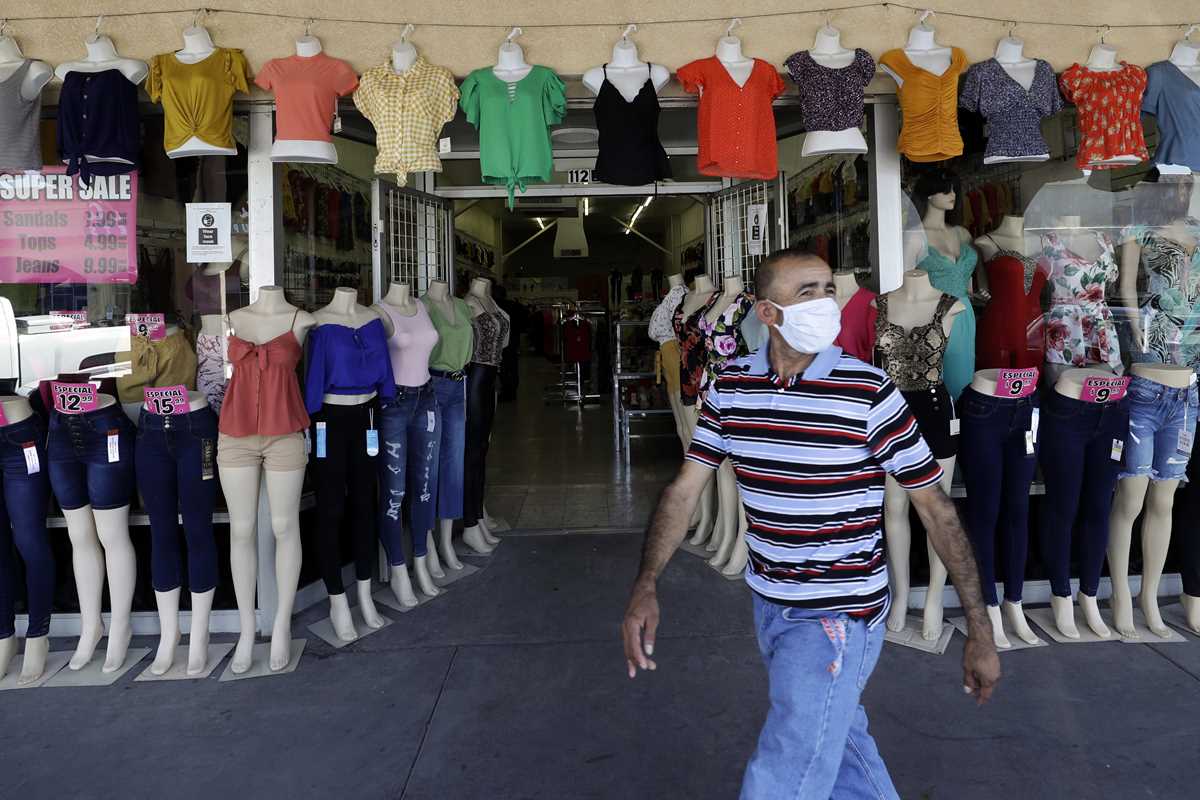 A man passes a clothing shop Tuesday, June 30, 2020, in Calexico, Calif. Saddled with a surge in positive cases and hospitalizations for the new coronavirus, a farming region on California’s border with Mexico is now forced to backpedal on reopening its battered economy. The Imperial County board of supervisors unveiled a plan late Monday that includes closing businesses deemed non-essential, except for curbside pickup, and shuttering county parks. (AP Photo/Gregory Bull) 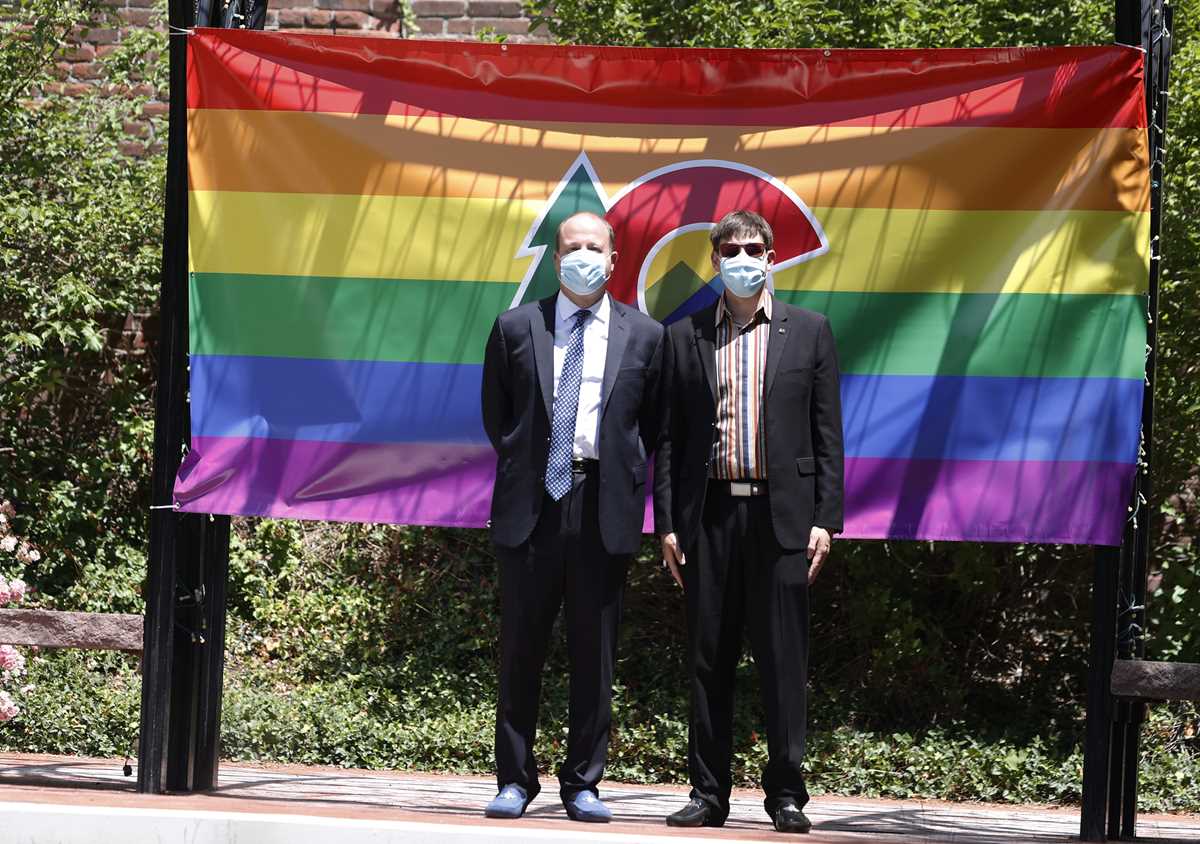 Colorado Gov. Jared Polis, left, and the state’s first gentleman, Marlon Reis, pause in front of a pride flag in the garden of the Governor’s Mansion on the way into a news conference about the state’s efforts to cut the spread of the new coronavirus Tuesday, June 30, 2020, in Denver. (AP Photo/David Zalubowski)

BANGKOK — Thailand has further eased COVID-19 restrictions, allowing the reopening of schools and high-risk entertainment venues such as pubs and massage parlors that had been shut since mid-March.

It also is allowing in foreign visitors on a controlled basis, limiting entry to those with existing family or work ties, students, technical experts, investors and specially invited VIPs. Scheduled passenger flights to Thailand were suspended in early April.

The number of foreign visitors allowed into the country each day is limited to 200, and they are supposed to travel on repatriation flights bringing Thai citizens home. All returnees, foreign and Thai, will be subject to varying degrees of quarantine.

All confirmed coronavirus cases for the past five weeks have been repatriated Thais rather than cases of local transmission, giving the government confidence to lift restrictions. However, it has extended through July a state of emergency, which critics charge is used to suppress political dissent.

HERE’S WHAT YOU NEED TO KNOW ABOUT THE VIRUS OUTBREAK:

— Beirut’s airport is partially reopening after a three-month shutdown and Lebanon’s cash-strapped government is hoping that thousands of Lebanese expatriates will return for the summer, injecting dollars into the country’s sinking economy.

— The European Union has announced it will reopen its borders to travelers from 14 countries and possibly China soon. Most Americans, however, have been refused entry for at least another two weeks due to soaring coronavirus infections in the U.S.

— In Republican circles — with the notable exception of the man who leads the party — the debate about masks is over: It’s time to put one on.

Follow all of AP’s pandemic coverage at http://apnews.com/VirusOutbreak and https://apnews.com/UnderstandingtheOutbreak

HERE’S WHAT ELSE IS HAPPENING:

SEOUL, South Korea — South Korea is considering including religious facilities on the same list with nightclubs, hostess bars and karaoke rooms as “high risk” venues for the spread of COVID-19 following a slew of transmissions tied to church gatherings.

South Korean Prime Minister Chung Sye-kyun said during a virus meeting on Wednesday that more than 40% of the country’s newly confirmed infections over the previous three days have been traced back to places of worship.

He pleaded people to refrain from religious gatherings and criticized churches and other facilities for failing to implement proper preventive measures, such as requiring followers to wear masks and sit apart during services.

“If religious facilities continue to be an environment for infections by failing to implement anti-virus measures, it will be inevitable for the government to designate (them) as high-risk facilities and enforce strong restrictions,” Chung said.

High-risk facilities are advised to close or otherwise must enforce anti-virus measures, including distancing, temperature checks, keeping customer lists and requiring employees and visitors to wear masks. They are also required to register visitors with smartphone QR codes so they could be easily located when needed.

MINNEAPOLIS — The University of Minnesota says seven athletes from “multiple sports” have tested positive for the coronavirus.

The Gopher Athletics Department conducted 170 COVID-19 tests during June, and seven athletes tested positive. The school said Tuesday that students who test positive are entered into a protocol and asked to self-isolate. Those students will have access to all necessary resources and food, and will be in daily communication with the university’s athletic medical staff.

Those students will have to undergo additional testing and screening before they can participate in team activities. A team physician also must clear the student.

The university said contact tracing was conducted, and any person who was potentially exposed was asked to quarantine to help prevent spread of the virus.

BEIJING — China has reported just three new confirmed cases of coronavirus, all in the capital Beijing where an outbreak last month appears to have run its course amid intense testing and case tracing.

No new deaths were reported Wednesday, leaving the toll at 4,634 among 83,534 cases of COVID-19 recorded since the virus was first detected in the central Chinese city of Wuhan late last year.

The National Health Commission said 421 people are in treatment with another 108 under monitoring for being possible cases or having tested positive for the virus without showing symptoms.

Beijing has begun discharging those infected in the recent outbreak tied to the Xinfadi wholesale food market in the southwestern suburbs.

With 328 cases reported since June 11, Beijing has reinstated some prevention measures, suspended classes for schoolchildren and carried out 8.3 million virus tests among the city’s more than 20 million residents.

She said as of Tuesday there have been over 8,600 coronavirus cases in the state, with over a quarter of those cases identified in the past two weeks. The Oregon Health Authority said 207 people in Oregon have died from the disease.

The state of emergency declaration is the legal underpinning for the executive orders Brown has issued throughout the pandemic, including her orders on reopening Oregon, as well as orders related to childcare, schools, and higher education operations.

Extending the state of emergency declaration allows those orders to stay in effect. She will review and reevaluate each of her emergency orders every 60 days. Brown said this extension will last through Sept. 4.

CALEXICO, Calif. — An official says a farming region on California’s border with Mexico has sent hundreds of patients to hospitals outside the area in recent weeks as leaders accept Gov. Gavin Newsom’s recommendation to backpedal on reopening its battered economy.

The Mexican border city of Mexicali has taken its own measures to combat the virus, including a checkpoint for motorists entering from the U.S. that created a seven-hour backup on the U.S. side on Saturday.

The nation’s leading infectious disease expert made the remark at a Senate hearing on reopening schools and workplaces.

Asked to forecast the outcome of recent surges in some states, Fauci said he can’t make an accurate prediction but believes it will be “very disturbing.”

“We are now having 40-plus-thousand new cases a day. I would not be surprised if we go up to to 100,000 a day if this does not turn around, and so I am very concerned,” said Fauci, infectious disease chief at the National Institutes of Health.

Fauci said areas seeing recent outbreaks are putting the entire nation at risk, including areas that have made progress in reducing COVID-19 cases. He cited recent video footage of people socializing in crowds, often without masks, and otherwise ignoring safety guidelines.

Top Ten Brokerages You Can Trust

There are more than 500 brokerages and research houses that hire analysts to issue ratings and recommendations. Collectively, these brokerages and their analysts publish approximately 175,000 ratings each year. Every trading day, there are nearly 700 reports and recommendations that are released to the public. To say that it’s difficult to separate the signal from the noise when interpreting this data would be an understatement.

MarketBeat has developed a system to track each brokerage and research house’s stock recommendations and score them based on their past performance. If Goldman Sachs predicted that Apple’s stock price was going to hit $150.00 on a specific date, how accurate were they? If Bank of America issued a “strong buy” rating on a stock, how did that stock perform compared to the broader market over the following twelve months. This tracking system has been applied to the 650,000+ ratings that MarketBeat has tracked during the last five years to identify which brokerages you can really trust (and which you can safely ignore).

This slide show lists the 10 brokerages who have issued the most accurate analyst recommendations over the past several years, as measured by the performance of their “buy” ratings and the accuracy of their price targets.

View the “Top Ten Brokerages You Can Trust”.

The New Cannabis: Better Stocks to Buy for the Upside

© 2009 - 2020 Trading foreign exchange, cryptocurrencies or other financial products on margin carries a high level of risk and may not be suitable for all investors. The high degree of leverage can work against you as well as for you. Before deciding to trade foreign exchange, cryptocurrencies or oher financial products you should carefully consider your investment objectives, level of experience and risk appetite. The possibility exists that you could sustain a loss of some or all of your initial investment and therefore you should not invest money that you cannot afford to lose. You should be aware of all the risks associated with foreign exchange trading,cryptocurrencies or other financial products, and seek advice from an independent financial advisor if you have any doubts. Biedex.com would like to remind you that the data contained in this website is not necessarily real-time nor accurate. The data and prices on the website are not necessarily provided by any market or exchange, but may be provided by market makers, and so prices may not be accurate and may differ from the actual price at any given market, meaning prices are indicative and not appropriate for trading purposes. Biedex.com and any provider of the data contained in this website will not accept liability for any loss or damage as a result of your trading, or your reliance on the information contained within this website. Biedex.com LTD ©. 2019 All rights reserved. A Biedex Ventures Limited Company. London UK. Stocks: 15 minute delay by tradingview, teletrader, quotemedia (Teletrader is real-time). Futures, Forex, Cryptocurrencies: 10 or 15 minute delay. Notice: the risk warning and terms of use applies to this site.

Are you sure want to cancel subscription?