UGI Corp.: Investors Need To Like The Propane Business

In 2014, I authored a SA article on UGI Corp. (UGI). Recently, a reader suggested an update to see how things have done, and it’s safe to say that times have been interesting for UGI. I have not bought into the UGI story, and as a non-shareholder, my attention has been diverted to other opportunities. So, Mr. Reader, here is my loop back to UGI. Since publication in 2014, UGI stock price only has risen 33.8% and has offered a total return of 52.7% versus the S&P 500’s return of 77.9%. However, share prices have retreated from a high of $55 in 2019 to a current price of $42. It still rates as a Neutral almost 6 years later, but there can be a more bullish case made for owning UGI from a technical vantage point.

In August 2019, UGI acquired the 76% of AmeriGas Propane it did not already own and has converted the previous master limited partnership into a wholly owned subsidiary. AmeriGas is the largest propane distributor in the US, serving residential, commercial, industrial and transportation needs. AmeriGas services 1.7 million customers from 1,900 distribution points. It is a leader in the propane cylinder refill/exchange industry with its offering known as ACE (AmeriGas Cylinder Exchange). AmeriGas revenues are about evenly split across US regions, with residential shipments comprised about 47% of FY2019 sales, commercial/industrial 36% and transportation 11%. Of the $1.17 in reported adjusted 1st qtr. FY 2020 earnings per share, AmeriGas contributed $0.43 per share.

UGI Int’l operates a propane distribution business throughout much of Europe, with the biggest market being France. UCI Int’l uses the brand names UGI France, Flaga, AvantiGas, DVEP and UniverGas. UGI is the largest LPG distributor in Austria, Denmark, France, Hungary, Belgium, and Luxembourg. UGI is a significant distributor in Czech Republic, Norway, Poland, Slovakia, Sweden and The Netherlands. UGI Int’l contributed $0.34 per share for the 1st qtr.

UGI Utility distributes natural gas as a regulated LDC and electricity as a local electric distribution company to over 700,000 customers in eastern and central PA. Utility services contributed $0.29 per share.

However, investors should also be aware of the potentially negative impact of warmer weather on propane shipments used for residential and commercial/industrial heating. About 5% of all U.S. households use propane as their primary space heating fuel, and many of these households are in the Midwest and Northeast. For the first quarter 2020, management commented revenues were negatively impacted at AmeriGas, UGI Int’l and UGI Utilities by warmer weather. Reviewing the most recent SEC 10-Q vs. 2019 outlines some interesting comparisons:

Using Hennessy Gas Utility Index Investor fund (GASFX) and Morningstar calculations as a valuation comparison, UGI is currently valued at a discount with GASFX trading at a forward P/E of 19.6x vs. 16.1x for UGI; both yield 3.1%; GASFX trades at 1.7x P/S and 1.9x P/B while UGI trades at 1.1x and 2.1x, respectively.

The icing on the UGI cake is their quality ranking of A- by S&P for consistency in earnings and dividend growth over the previous 16 years. UGI has raised its dividend annually for the past 33 years and has a 136-year history of dividend payouts.

Of interest to many investors could be the technical patterns UGI is experiencing. Below are two charts, the first is a 12-month clearing showing the current double bottom at $40.50-41.00. This is a powerful bottoming sign, until it’s not. 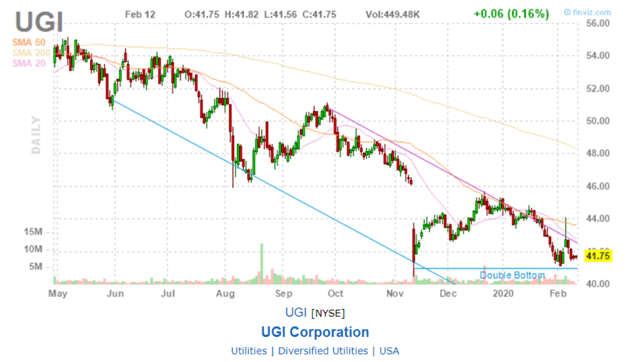 The following point and figure chart is a bit longer term, dating back to May 2014. From this chart, $39 is another double bottom going back to Sept 2016. 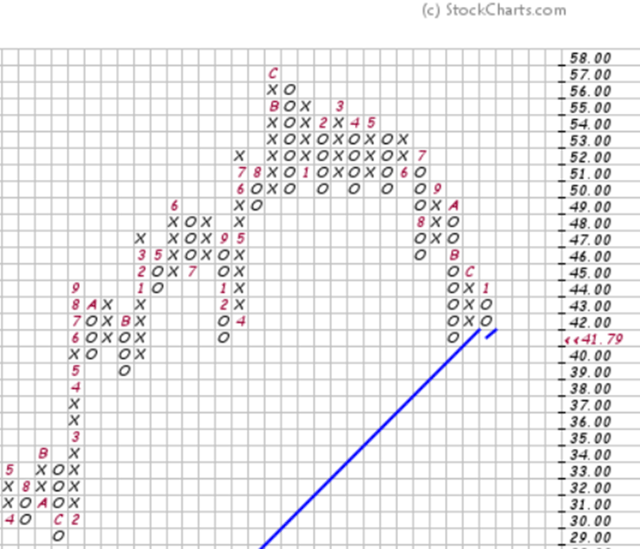 Income investors looking for exposure to the mature and slow-growing propane business could consider UGI as a viable candidate with its stable and competitive yield. Technical investors could look at UGI at a current entry point for a starter position based on its holding to the double bottom, and to add shares if prices bounce off the longer-term bottom at $39. However, it should be noted the current share price is below the 200-day moving average of $48.32 and 75-day moving average of $44.10 – neither of which is a good sign.

Personally, I rate UGI as Neutral and don’t plan on adding it as a portfolio addition but will watch closely during the next market downturn.

Author’s Note: Please review my profile for the required and necessary disclosures.

Disclosure: I/we have no positions in any stocks mentioned, and no plans to initiate any positions within the next 72 hours. I wrote this article myself, and it expresses my own opinions. I am not receiving compensation for it (other than from Seeking Alpha). I have no business relationship with any company whose stock is mentioned in this article.

The mission for Lyft (NASDAQ:LYFT) in 2020 is to find that elusive…

Please log in again. The login page will open in a new tab. After logging in you can close it and return to this page.