Karora Resources: The Hunt For Coarse Gold Can Begin (OTCMKTS:KRRGF)

by seekingalpha
in Uncategorized
8 min read

Karora Resources (OTCQX:KRRGF) (formerly known as RNC Minerals) announced an important event related to its Beta Hunt mine. Karora made a deal with Maverix Metals (MMX) that will reduce Maverix’s gold royalty on the Beta Hunt mine from 7.5% to 4.75%. This is a major milestone, as the high royalty prevented Karora from pursuing the full potential of Beta Hunt. After the royalty is reduced, Karora can start to pay more attention to the significant coarse gold potential of the mine.

According to the agreement, Karora will pay Maverix $5 million in cash and approximately $13 million in common shares. The cash payment will be divided into two halves, the first one will be payable immediately and the second one in January 2021. The share payment will consist of 35.1 million common shares of Karora Resources, valued at C$0.506 per share (20-day VWAP). The volume of outstanding shares will increase from 611.7 million to 646.8 million, or by 5.74%.

The total consideration equals approximately $18 million. It looks like a good deal for Karora. At the current gold price of approximately $1,750/toz, $18 million equals approximately 10,285 toz gold. The royalty is reduced by 2.75 percentage points, which means that the Beta Hunt mine needs to produce only 374,000 toz gold, for the reduction to pay off (2.75% of 374,000 toz equals 10,285 toz). Of course, at higher gold prices, the breakeven point will occur even sooner. 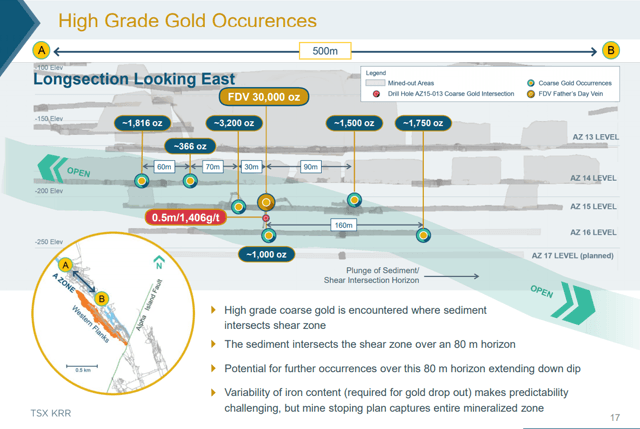 Not much coarse gold was produced over the last twelve months, as Karora fed its mill with ore from Higginsville and with common ore from Beta Hunt. But this should start changing now, as the extremely high Beta Hunt royalty was reduced from 7.5% 4.75%. Now, Karora will be more motivated to go hunting for the coarse gold and to elevate the overall Beta Hunt mine gold production volumes. This was also confirmed by Andre Huet, Karora’s CEO:

For the first time in over seven years, a significant portion of the royalty burden on exploration and production has been lifted at Beta Hunt. This transformative agreement will unlock value for both Karora and Maverix shareholders by allowing our strong operational team to develop Beta Hunt to its full potential. It is important to remember that with respect to gold mining, Beta Hunt is still in an early stage of development with vast additional exploration potential for resource growth. We look forward to continue working with our partner, Maverix, to exploit the exciting potential at Beta Hunt.

From Maverix’s point of view, the reduction of the royalty may look less positive. But at second glance, Maverix will receive some cash and, more importantly, also a 5.74% stake on Karora’s equity. And what is more important, it is better to own a 4.75% royalty (which is by the way still higher than is the common standard in the industry) from an operating mine with owner dedicated to expanding resources, reserves and also production, than to own 7.5% royalty from a mine owned by a company that is less motivated to invest money and time in development, due to the high royalty burden. Also Daniel O’Flaherty, Maverix’s CEO seems to be optimistic:

We look forward to management unlocking the significant geologic and production upside potential at Beta Hunt and are enthused to provide additional incentive to Karora to maximize this value for the benefit of both Maverix and Karora shareholders.

The deal between Karora and Maverix looks like a win-win. The reduced royalty means that Karora should be more motivated to start pursuing the coarse gold potential at the Beta Hunt mine. As a result, it is possible to expect gold production to start growing in the coming months. Although Maverix surrendered a big portion of the royalty, it gained an equity interest in Karora, which means that it can benefit not only from Beta Hunt but also from Higginsville operations. Although Karora has proven that it can do quite well even without coarse gold, I believe that the majority of its shareholders purchased their shares due to the Beta Hunt mine coarse gold potential. After some delays, it seems like Karora should finally start to pay more attention to coarse gold soon.

Disclosure: I am/we are long KRRGF. I wrote this article myself, and it expresses my own opinions. I am not receiving compensation for it (other than from Seeking Alpha). I have no business relationship with any company whose stock is mentioned in this article.

Editor’s Note: This article covers one or more microcap stocks. Please be aware of the risks associated with these stocks.

Interfaith group: No Buddhist or Hindu statues in nightclubs

The New Cannabis: Better Stocks to Buy for the Upside

© 2009 - 2020 Trading foreign exchange, cryptocurrencies or other financial products on margin carries a high level of risk and may not be suitable for all investors. The high degree of leverage can work against you as well as for you. Before deciding to trade foreign exchange, cryptocurrencies or oher financial products you should carefully consider your investment objectives, level of experience and risk appetite. The possibility exists that you could sustain a loss of some or all of your initial investment and therefore you should not invest money that you cannot afford to lose. You should be aware of all the risks associated with foreign exchange trading,cryptocurrencies or other financial products, and seek advice from an independent financial advisor if you have any doubts. Biedex.com would like to remind you that the data contained in this website is not necessarily real-time nor accurate. The data and prices on the website are not necessarily provided by any market or exchange, but may be provided by market makers, and so prices may not be accurate and may differ from the actual price at any given market, meaning prices are indicative and not appropriate for trading purposes. Biedex.com and any provider of the data contained in this website will not accept liability for any loss or damage as a result of your trading, or your reliance on the information contained within this website. Biedex.com LTD ©. 2019 All rights reserved. A Biedex Ventures Limited Company. London UK. Stocks: 15 minute delay by tradingview, teletrader, quotemedia (Teletrader is real-time). Futures, Forex, Cryptocurrencies: 10 or 15 minute delay. Notice: the risk warning and terms of use applies to this site.

Are you sure want to cancel subscription?